Revere Camera Co. of Chicago was founded in 1939 by Samuel Briskin, a Ukrainian immigrant. His first company manufactured automobile radiators. He applied all his experience from that to create high quality, reasonably priced movie cameras and projectors and soon became the 2nd largest home movie camera company right after Bell & Howe. 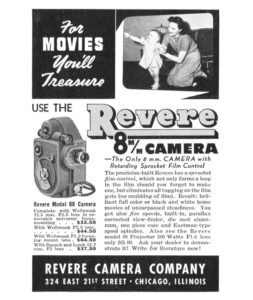 Samuel loved factories and manufacturing and was often found on the line checking things out. Samuel engineered his cameras for the user. They were dependable, had unique features such as slow motion, and was built to last. His design esthetic was industrial because of his automobile experience. This gave the early Revere cameras a distinctive look from the competition.

His son Ted became company president after returning from WWII with radically different ideas from his father. The two clashed continuously on design, pricing and marketing issues. Samuel sold the company to the 3M company in 1960.