Ted Briskin, son of company founder Samuel Briskin, began managing the Revere Camera Company when he returned from WWII. He became one of Chicago’s most successful young businessmen by 1948. He utilized that success to mix it up in Hollywood. Over two decades he married three starlets including Betty Hutton, Joan Dixon and Colleen Miller.

What made him great at business worked against him in Southern California. Midwest arrogance with WWII values rubbed his wives and other people the wrong way. Ted was a regular at Hollywood’s finest parties and the tabloids had a field day with his antics 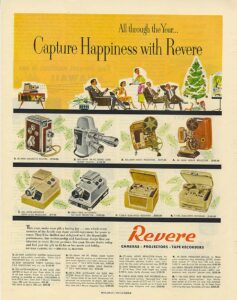 Revere 8mm movie cameras were made from the late 1930s through 1960s. The company’s first designs were by Ted’s father, Samuel Briskin who also owned an industrial manufacturing company. Revere cameras reflected his industrial past and were round and Victorian in nature. In the early 1950s Revere’s design changed radically to sleek modern lines exemplified by the Model 40 and 44. Ted is credited with the new designs influenced by the modern design movement of Southern CA. Samuel hated the new designs and fought with his son about getting them into production. Ted eventually won and the new models were huge successes.